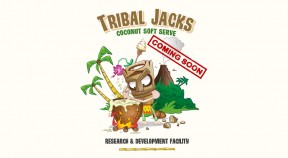 With over a year of extensive development, trials and sleepless nights, Tribal Jacks – Vegan Coconut Soft Serve is now on its way to be to Australia. Jack has appointed Creative Ingredients, based in Melbourne is leading the charge as Jacks Exclusive Distributor within Australia for the Tribal Jacks range of Dairy Free Soft Serves.

Tribal Jacks is also rolling out into the New Zealand market and soon to be hitting the Singaporean & Malaysian markets too.. Watch this space.